Events in Syria have gotten very dangerous: the US is poised to attack that nation over alleged Chemical Weapons use, and Russia is telling the U.S. if we attack, then our missiles will be shot down and the planes/ships that launched them will be fired upon. Knowing that a direct conflict between Russian and US forces means serious war, it was no small affair for Russians watching their TV’s .

On the nightly news broadcast, Russian state TV had a segment telling citizens of that country what they should bring with them to BOMB SHELTERS.  Implicit in the segment was the notion that any Russian-US military conflict in Syria, would go Nuclear.

Right now, the entire continent of Europe is heavily dependent upon natural gas supplied by Russia.  The US and Europe want to “free” Europe from their dependence on Russia.

Syria is a long time ally of Russia and Syria’s President Bashar Assad knew that a gas pipeline to Europe from Qatar would directly harm his Russian ally. So he told the pipeline countries “No, your Qatar pipeline cannot run through Syria.”

So Mrs. Clinton wrote a memo outlining how Syria is a threat to the security of Israel, and how the US should support people who want to get rid of Bashar Assad.

Within weeks of that memo, agents from the US Central Intelligence Agency mustered together a group of malcontents and religious fanatics into what was called the “Free Syrian Army.”  The killing began almost immediately.

As word spread in the Muslim world about the effort to oust Assad, more radicals got involved and, ultimately, the entire effort was co-opted by the Muslim Brotherhood.  At that point, every Barbarian in the Muslim world headed toward Syria to get involved.  Many of these whack-jobs eventually formed into a group calling itself Islamic States of Iraq and Syria (ISIS).   Those are the folks who cut people’s heads off and/or burn people alive then release videos of such killings.

UPDATE – US Nuclear Targets. Do You Live in The Death-Zone?

ISIS then forcibly took control of the oil-producing section of Syria.  They began stealing the oil, hiring tanker truck drivers to take the stolen oil to Turkey, which allowed the oil in to be re-packaged and sold on the black market.  It is believed that Turkish President Recypt Erdogan and his sons profited tremendously from this smuggling.  ISIS itself was said to have earned upwards of $100 Million PER MONTH by selling this stolen oil.  With that money, ISIS was able to hire and pay more whack-jobs, grow, and takeover more land.

The Syrian Arab Army of the lawful Syrian government, fought these people for years.  But after years of these activities, the Syrian Arab Army was being badly defeated.  An exhausted President Bashar Assad traveled to Moscow to ask Russian President Vladimir Putin for military assistance.  Putin agreed, and Syria welcomed the Russian Military help.

Russia began using its military might to attack ISIS.  This did not sit well with the people in Saudi Arabia, Qatar, Jordan, Turkey or the US, which began supplying ISIS and the other whack-jobs with even more weaponry.

Trump saw what the US was doing and put a stop to it officially – but the US “deep state” continued some of the clandestine support despite what the President wanted.

The cut-off of most US support combined with the Russian attacks, smashed ISIS.

Thanks to Russian support, much of Syria is now back under control of its lawful government; except for certain small areas which are now being focused upon.

Enter the US “Deep State” once again.

One such attack took place last week, wherein Chlorine Gas was allegedly used in east Ghouta, a suburb of Damascus.  This is a strange thing to take place because Syria/Russia are actually WINNING.  They have no need at all to use such weapons, and call down another US military strike upon Syria over it.  Yet that’s what took place.

And now that this has taken place, the US is strongly proceeding toward another – much larger – military attack upon Syria.  Which brings us to today.

For the past three weeks, Russian Intelligence and Russian military have been warning that a “False Flag chemical attack” was being planned by US-backed rebels.  Russian Intel showed that “victims” were being brought in, cameras crews, satellite up-links and the like, all to set the stage for this sham.

The Russians also pointed out three weeks ago, the US had already massed numerous Navy ships in the eastern Mediterranean Sea, the Red Sea and in the Persian Gulf, all seemingly waiting for the sham attack to take place, so they could retaliate.

Once news got out about the coming staged chemical attack and the massing of US naval ships; things went quiet.  It seemed the fake attackers saw that they were exposed and chose not to attack.  Suddenly, last week, the “attack” took place.

Responding to the chemical attack, Russian and Syrian authorities uncovered Chlorine Cylinders, manufactured by MERCK Corporation at a German facility!!!!!  So these “chemical weapons” were actually made in a NATO country, not Syria !!!!

Just think about the HORROR that we’ll have to endure because of our leader’s ignorance.

Here are photos of the Chlorine Cylinder found: 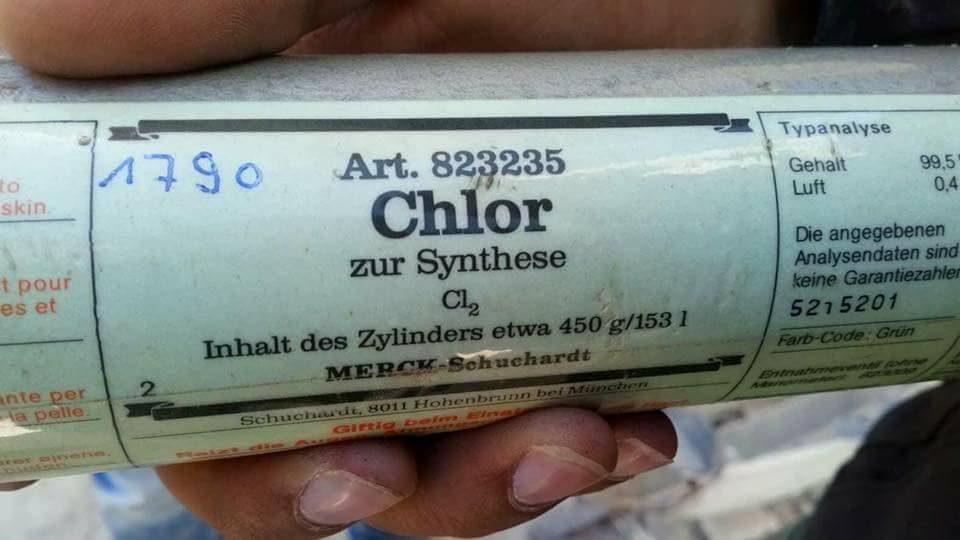 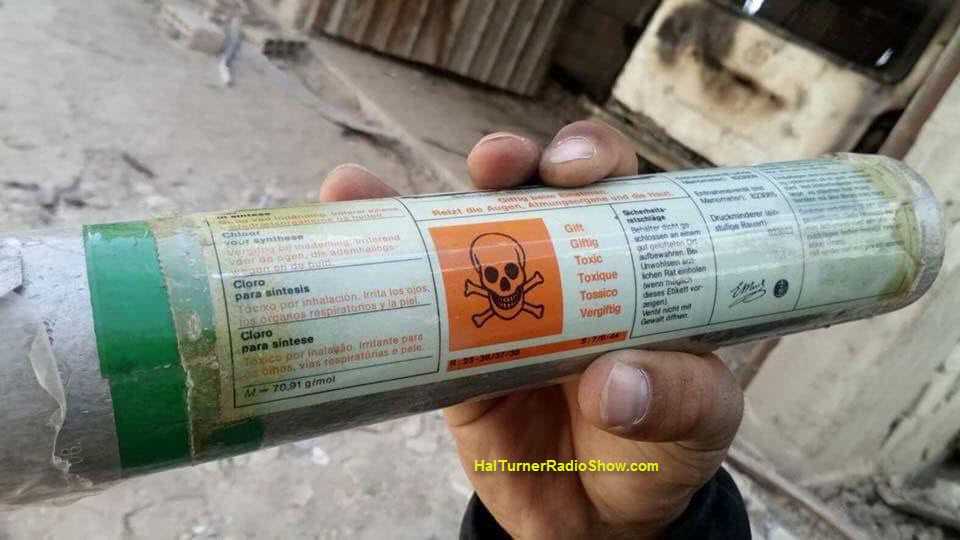 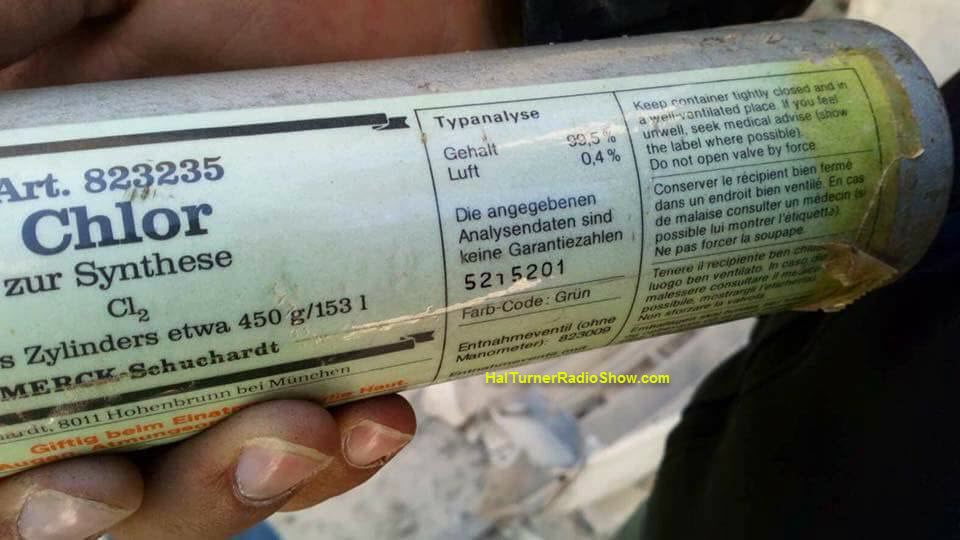 The only way these cylinders could have gotten into the Syrian war zone is if someone inside a NATO country arranged for these chlorine gas cylinders to be covertly shipped into Syria. They ended up in the hands of US-Saudi-backed “Jaish Al Islam” & “Al-Nusra Front” in Damascus country side in order to poison innocent Syrians and falsely accuse the Syrian government.

The Emp Survival Offer You’ve Been Waiting For

The serial number on the cylinder above makes it traceable.  And yet another problem arises there: MERCK Corporation seems to be intentionally concealing who they sold this too, who they shipped it to and when.

I then called MERCK World Headquarters which is located in my home state of New Jersey.  Julie Ann from MERCK’s National Call Center told me she was unable to get anyone from their Global Communications Group to answer my inquiry and they would get back in touch with me.  No such return call was received from MERCK. What is MERCK hiding?

Clearly, the chemical/Pharmaceutical giant has records on who they sold the Chlorine Gas to, when it was sold, and to whom it was shipped; why won’t MERCK provide the information now that the company knows its product was used in a mass-murder chemical weapons attack?  Who is MERCK protecting by failing to reveal the information?

Stockholders in MERCK may wish to ask themselves if they wish to continue holding stock in a corporation that conceals information involving a CRIME AGAINST HUMANITY?

And now that this information is out here in public, other MERCK stockholders may wish to get out of MERCK before any potential avalanche of people decide they should cut-and-run from that company stock.

In the US, reaction to the alleged “chemical attack” was fast and furious.  The military option was immediately brought to the front, and word came from the President on down that there were going to be serious consequences for this chemical attack.  Syria’s government was openly blamed and Russia was being called an accessory for failing to control their Syrian ally.  Both Syria and Russia DENIED any involvement in the alleged attack.

Which brings us to Russian state TV.  Last night on the nightly news broadcast, the coming conflict with the USA was the big news and officials in Russia repeatedly said “If the United States attacks Syria based on this phony chemical weapons fraud, then Russia will shoot down the incoming US missiles and fire upon the platforms which launched them – including Ships, planes and ground based locations.  This action by Russia would likely cause a war between the US and Russia and . . . . . Russian state TV gave citizens advise on what they should take to Bomb Shelters.

The Russian people ARE being told what’s taking place.  Americans?  Nothing.

The US mass-media has completely avoided discussing the ongoing situation.  The American people are blissfully ignorant about the dangerous situation we’re facing, and they are totally unprepared for any war to erupt with Russia.  A war that may start today, tomorrow or this weekend, if the US moves ahead with plans to attack Syria over a potentially FRAUDULENT chemical weapons attack.

Think about that for a moment: A REAL war over a PHONY Chemical attack?  An attacks that our own “Deep State” clearly had a hand in by supplying Chemicals from Germany?  An attack for which there has been NO investigation, yet blame has already been assigned?  There’s something very wrong here; something VERY wrong with this picture.

We’ve seen this play before: When then-Secretary of State Colin Powell sat in the UN Security Council, held up a vial of ANTHRAX and claimed that Iraq possessed it and was going to kill millions.  We now know that was a lie.

Here we are, years later, and we’re being told Syria used chemical weapons.  Gee, how convenient.  But as before quite possibly a lie.

Call Congress and tell them you don’t want another war based on another LIE.

But prepare anyway.  Congress has Bankrupted the nation with excess spending and some of them realize the only way to get out of the $21 TRILLION debt is to get the country smashed in a war so they can tell creditors “Sorry, we can’t pay you back.”

Then prepare; because someone in a very powerful position, is pushing very hard for war.

Are YOU prepared to save yourself and your family if war erupts and the USA is attacked?  Here’s a list of suggested “Preps” to give you a chance at survival.

CIA & NSA CAN TARGET ANYONE, ANYWHERE, ANYTIME ON EARTH WITH MIND CONTROL TECHNOLOGY USING EITHER SATELLITES OR A LAND BASED FIXED PHASED ARRAY OF SCALAR WAVE TOWERS IN USA

Nine Meals Away From Anarchy

Martial Law, Civil War is Coming to America Just Like The Days of Hitler