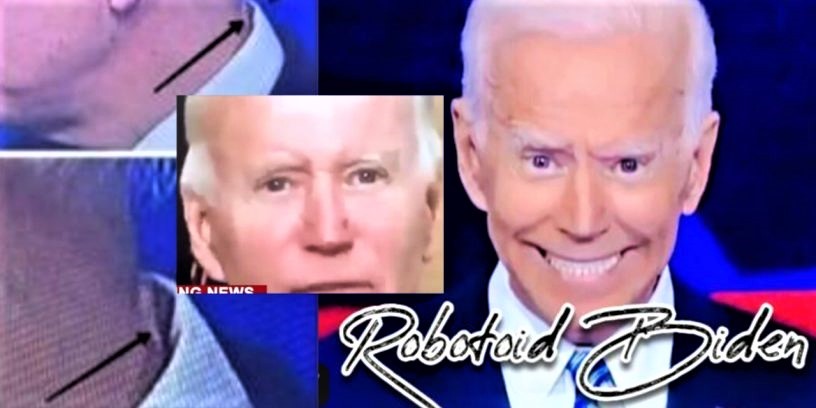 I’m not sure that “Cyborg” is the right term for what Joe is. A Cyborg is a biological human that’s been integrated with machine parts. Theoretically, anyone who’s been jabbed has had nano-tech installed inside them, turning them into a type of Zombie Cyborg and not even classifiable as human anymore according to the legal system….allegedly.

But that thing is not even a tiny bit human. It’s a total synthetic Robotoid that’s under the remote control of some Globalist shill bag. Tamara had coined him “Manchurian Joe“, but “Robotoid Joe” seems to be a more appropriate designation.

Most celebrities seem to be Robotoids these days. I think that most K-Pop groups are 100% Robotoid and I believe that “American Idol” is nothing but a Robotoid BETA testing program.

These things have been around for a long time and this technology is much much older than most realize. There were even accounts of Robotoids from ancient times. Nothing new under the sun, right?

How is it that you find this difficult to accept?

I have spoken of this procedure prior to this and will not take precious time to repeat and repeat for those who simply do not wish to go back and effort at gaining the information. You see, I, Hatonn, care not in the least whether or not you believe me nor if you under­stand the mecha­nism by which it works.

You are “willing victims” of the lie and YOU will awaken or sleep on—it is up to you. Our com­mission is to outlay the Truth unto you—YOURS IS TO CON­FIRM AND ACKNOWLEDGE—OR NOT, AS YOU WISH. There are technical advances upon your planet, already in use by the Elite, which would boggle your senses—robotoids are simplistic in relative comparison.

They are comprised totally of physical “matter” mani­fested into what you perceive as physical coalition of these physical matter par­ticles coalesced ac­cording to the DNA/RNA holographic blueprint whereby the re-creation will be a projection of that which is being copied at the time of replica­tion.

The most obvious clue to replication is that the “new” entity will always be fresh and more youth­ful than that which you will have seen just prior to re­placement. This is why you must have con­trol of all your media in order to pull off the subterfuge.

Even under strict control of photogra­phy and make-up tech­nicians—the replication will often differ—usually in reversal of character habits or muscle actions—i.e., there will be a reversal of a “lop-sided” smile—thusly, “talking out of the other side of the face”, so to speak. The reversal of these traits is all but impossible to eliminate. So, too, are features which do not re­spond to stress changes as will a “haggard” or fa­tigued face pattern.

Therefore, the structure and location of the ears, nose foundation and eye socket location must be perfected from viewing to viewing through cos­metic illusion and can never be EXACTLY duplicated. The whole ability to fool the public is the ab­solutely accepted “absurdity” of such a possibility of scientific achievement and your lack of attention.

Viral Content: What Is The Secret To a Long Healthy life? This Secret Ancient Japanese Tonic Recipe Will Help You Melts 54 LBS Of Fat

Do you not note that often, even as with Bush, that Bar­bara is programmed to note that

“…the reason George appears different and weary is that he is getting very little rest as he must ponder ….”

You ones pick it up, give sympathy to poor Mr. Bush and beat his drum more loudly for all his pressures. No, the replica simply showed the deviations from the prior entity.

The replicas become weaker with each reproduction and do not stand up under stress. Further, any outstanding negative traits of personality in the original will become exaggerated and un­predictable in actions.

There will be wide memory gaps and erratic personality projections. If you ones would pay atten­tion, you could rapidly bring this subterfuge to a halt and the truth would flow across the land like a blinding light. However, you ones prefer to persecute the bringers of the Truth of it and allow the replicas to continue to hold your very existence in their mechanical hands.