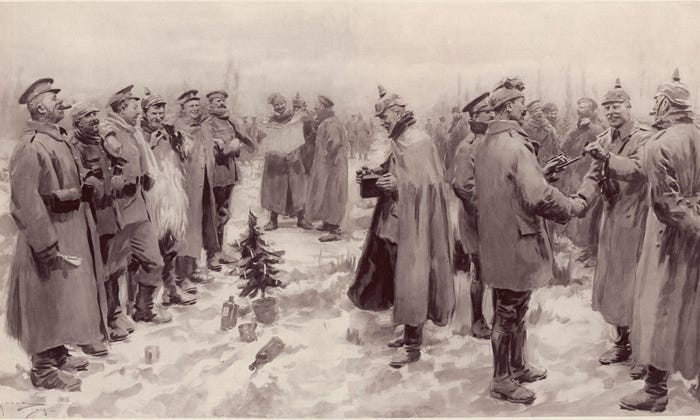 It happened more than a century ago. It is regarded as one of the most storied and strongest moments in history. On Christmas Eve 1914, in the dank, muddy trenches on the Western Front of World War I, a remarkable thing happened:

On Christmas Day in 1914, German, British, and French soldiers left their trenches along the western front of World War I to observe the holiday in peace.

In the midst of war, soldiers laid down their arms to sing Christmas carols, play soccer, and barter with the cigarettes and sweets they’d received in care packages from the nations they served.

The event would later be treated in numerous films, documentaries, and books — although often with rose-colored glasses. 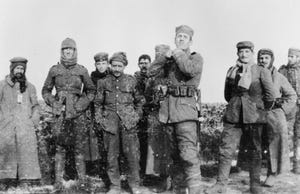 British Army Captain Edward Hulse captured some of the now-famous halt in hostilities — which he called “the most extraordinary Christmas in the trenches you could possibly imagine” — in letters to his mother.

At 8:30 that morning, four unarmed German soldiers left their trenches to approach their British enemies, only to be intercepted by a few suspicious British soldiers. One of the Germans “started off by saying that he thought it only right to come over and wish us a happy Christmas, and trusted us implicitly to keep the truce,” Hulse wrote. 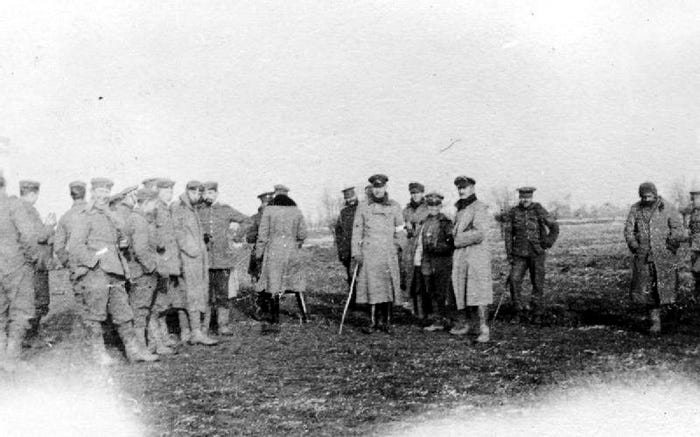 The soldiers make small talk — “their spokesman” had left a girlfriend and a three-horsepower motorbike in England — but their interactions still fell within the context of the ongoing war. “[The Germans] praised our aeroplanes up to the skies,” Hulse wrote, “and said that they hated them and could not get away from them.”
The motion for peace came on German initiative. On Christmas Eve, decorated trees began to pop up from their trenches, followed by signs reading “You No Fight, We No Fight.”

To various degrees across the front, German and British troops put down their weapons and fraternized. In some places, the truce was just an opportunity for each side to bury the dead strewn in no man’s land, the stretch of earth between opposing trenches. In other places along the front, the fighting continued.

Overall, the truce was a heartening case study in the nature of human beings and their capacity to wage war on one another.

“By midday,” the narrator of a BBC documentary on the event explains, “nearly half the British frontline army is involved in the truce,” though how widespread the suspension of the war really was on December 25, 1914 remains in dispute.

An illustration of the Christmas Truce published on Jan. 9, 1915 in the Illustrated London News. Wikimedia Commons

Historians explain that the Truce came during a period in the fighting when a “‘live and let live’ attitude developed in certain areas of the trench system,” the BBC reports.
“So much interchange had occurred across the line by early December” that a general “issued a directive unequivocally forbidding fraternization,” writes Stanley Weintraub in Silent Night: The Story of the World War I Christmas Truce.

The general’s concern was that bonding “discourages initiative in commanders, and destroys the offensive spirit in all ranks … Friendly intercourse with the enemy, unofficial armistices and the exchange of tobacco and other comforts, however tempting and occasionally amusing they may be, are absolutely prohibited.”

It went on nonetheless, as the Truce itself shows. This might have been because of existing rifts between the rank and file and their leadership. Indeed, the Truce was a push by lowly privates, many of them shipped to the frontline against their will and fighting the war out of resignation rather than nationalistic fervor.

“Many on both sides focused more on trying to stay warm and dry, securing food, and avoiding death than pursuing the aims of their generals,” according to The Encyclopedia of World War I’s entry on the Christmas Truce.

The “dangers” of peace may not have been purely imagined for the political and military leadership that believed in the necessity of fighting the Great War. As Weintraub writes, past truces in military history did not have the same scale, duration, or “potential to become more than a temporary respite,” as that of the Great War’s first Christmas. It was “seemingly impossible to have happened without consequences for the outcome of the war.”

But that wasn’t to be. World War I would only end in 1918, leaving 16 million dead across Europe and the Middle East. Mustard gas and the machine gun would become the hallmarks of a protracted war so brutal that many expected it to be history’s last major conflict, a cataclysm that would make war appear too mutually destructive to merit a place in the modern world. 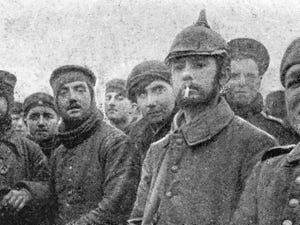 British and German troops in the trenches of the Western Front. Hulton Archive/Getty Images

Even the history of the Christmas Truce itself shows that this was a vain hope. A weak attempt at repeating the truce was made in 1915, but a tradition would not take hold due to “the high numbers of dead and hardened attitudes on both sides but also because of actions of senior commanders.”

In December 1915, the British command even ordered artillery fire to mark every daylight hour, “and threats to court martial fraternizers and shoot deserters [had] put the final block on any contact,” according to the BBC’s documentary.

But 106 years later, the Christmas Truce remains a bright spot in an otherwise bleak conflict that ushered in many aspects of modern war.