FAMILY PROJECT SPRING 2020“THE POTAGER” : HOUSE AND BLOOM – FROM GRASS TO GARDEN From Grass To Garden presenting… “The Potager”

I am so excited to share this reveal with you all!  This was our first ‘project’ at our new home and while the garden is in its still in early stages we are hoping it will produce lots of food.

You might be wondering why we were in such a rush to get a vegetable garden in, and while we are certainly keeners — there was the matter that we had over 200 starters that surprisingly took well so we really wanted to get them into the ground as they were too big for their pots.  The challenge was there was no former vegetable gardens on the property, and we also were mindful to avoid any rash decisions in where and how we were going to build “The Potager”.

While we would have liked to have had some more knowledge to best plan out the configuration we were limited on time and so we really just had to get the plants into the ground.  After lengthy discussion and wandering about the yard, we opted to build the garden in a location that was level, and close to the house with all day sun.

Essentially, while the house was teeming with chaos and boxes what did we do?  We didn’t do what most reasonable folk would do – oh no- we decided to built “The Potager” in just under a week!!!

Once we had chosen a location, Chris being meticulous (drives me crazy sometimes!), measured it all out to ensure the right amount of space, sun/shade, and then calculated the materials required as well as making various calls to source out the best pricing and various options.  This is the part that drives me crazy but is likely where we save our pennies.  Even though he drives me nuts with ‘price-shopping’ and planning even the littlest things, I realize all those ‘little things’ can add up to big cost so I am grateful to him for this. 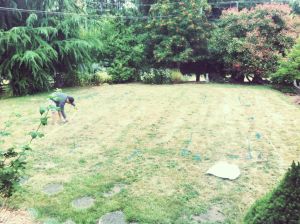 With regards to the materials used, Chris chose fir as the cost was significantly less.  (Ideally its recommended to use cedar because it has a natural preserve in the wood that allows it to last longer).  To help preserve the fir  a double-boiled linseed oil was applied.

He used 2×12 for the square boxes and 2×10 for the long rectangular boxes. 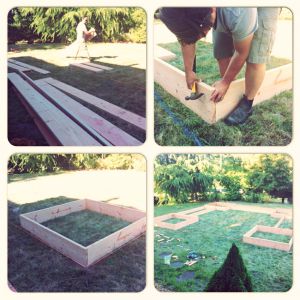 The next day the boxes were levelled and staked into place.  Chris explained it was important to be meticulous here to ensure that the framing of the boxes was square, because if not, the gate and fence would be off and in his words: “look terrible”.

He also put posts in, which was tough as the ground was hard from being so dry.  Initially, Chris attempted to pound the posts into place which was unsuccessful.  Off Chris went, frustrated as hell and with ripped/blistered hands to the local tool rental store and arrived home shortly later with a gas-powered hole auger.

(Incidentally, we highly recommend calling your gas company prior to digging to ensure you don’t put a post through a gas line!  Thank goodness we called first, as it was directly under where the gate post was to be!)

The Lost Book of Remedies ....The Lost Remedies of Our Grandparents.Click Below To Watch the Video

One of the aspects of the ‘design’ that we configured together included metal troughs (purchased at our local farm supply store ) in the middle, as well as a spot to sit.  I wanted to make the garden a place we could all ‘hang out’ in, with a coffee/book, while tending to the garden.

As much as it needed to be functional, it had to have an aesthetic appeal to it as well.

At the close of this day, we started installing the landscape cloth. 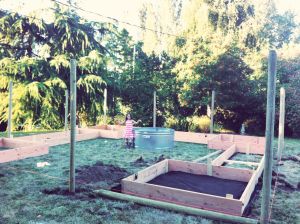 Up next was the fencing.  The metal 6 ft deer fencing was stretched and stapled into place the next morning.  I want to point out that we installed posts around the bottom perimeter not only to help staple the fence, but also to allow a cleaner edge.

As far as ground cover for the ‘flooring’ of the potager, after some discussiong we opted with a pathway gravel. 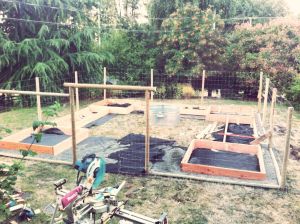 Once all the gravel was filled in (we used approx. 4 yards), then came the dirt.

We ordered a high quality garden blend and had 14 yards delivered to our lower field thinking that was a good location.  Not so, as Chris was required to push the wheel barrow uphill numerous times in extremely hot weather.  Just to give you an idea, that amount of dirt equals about 168 wheel barrow loads!!!!  After this task, Chris began talking about a dump trailer for the ride-a-mower.  (a little late Chris!) 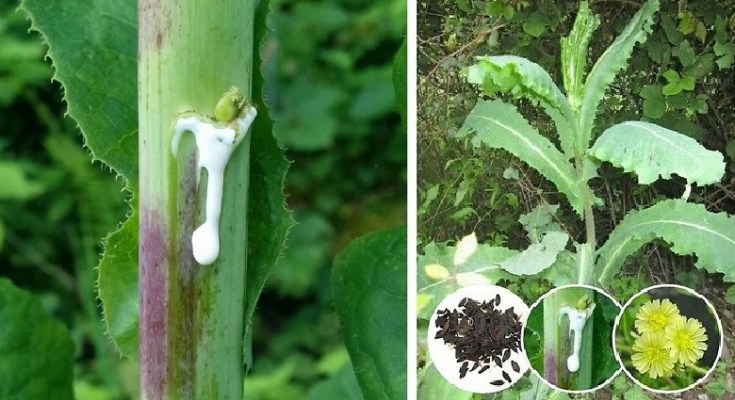 RECOMMENDED:THE BEST NATURAL PAINKILLER SIMILAR TO MORPHINE THAT GROWS IN YOUR BACKYARD

He took a break at one point to help me with placement of some garden art.  Thankfully the prior owners (who were a wonderful couple), left us some real goodies in the yard.  We used a vintage scale to place some herbs on and a tall windmill as a focal point for vines and peas to climb. 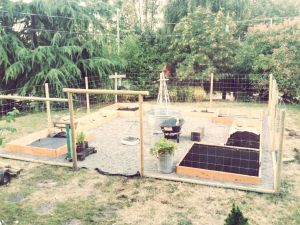 By now it was really starting to come together, though Chris was still hauling dirt uphill!  With all the starters beginning to go in we had an idea to make use of an old cast iron bed frame.  The bed frame was used as a trellis in the far corner “tomato bed”. 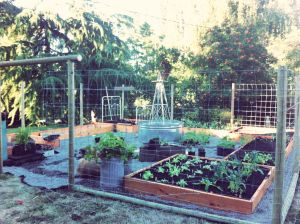 Once all the starters were in ground and the gate hung, we focused on finding a spot to relax in the garden.  For this, we made use of an old cast iron claw foot bathtub that that had been Chris’s parents couch 40 years prior!

It is such a neat piece and we thought it would be a great bench for “The Potager” as well as add an element of fun.  It ties in the bed frame as well. 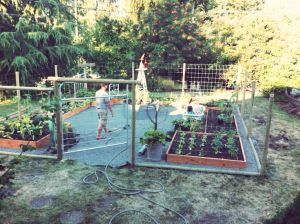 Chris then completed the fence with a top rail and also brought in the other metal troughs which have both since been planted with carrots and bush beans. 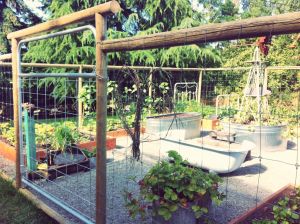 With the big stuff in place I found myself wanting to add just a few more ‘touches’.  I came upon some pieces of slate laying against the barn and decided I could make use of them in the garden.  We broke them into smaller pieces and labelled with chalk what we had in the beds. 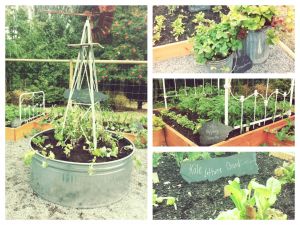 Though its still a work in progress and one that will evolve as we go, we have already spent lots of evenings in the garden watering, enjoying some wine and reading/researching.

Kerrington, our daughter, loves going out there to pick strawberries and watch the vegetables grow.  It is so gratifying to see her take an interest in food.  Growing, harvesting and understanding food just doesn’t just come from a “store”.  She is asking really neat questions and has taken to ‘country life’ like a fish to water.  Must be the farmer blood from my side of the family! 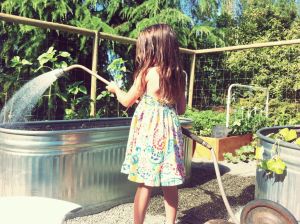 It is pretty amazing what one can accomplish in 4 days isn’t it?!  We are so so pleased with how it has all turned out.