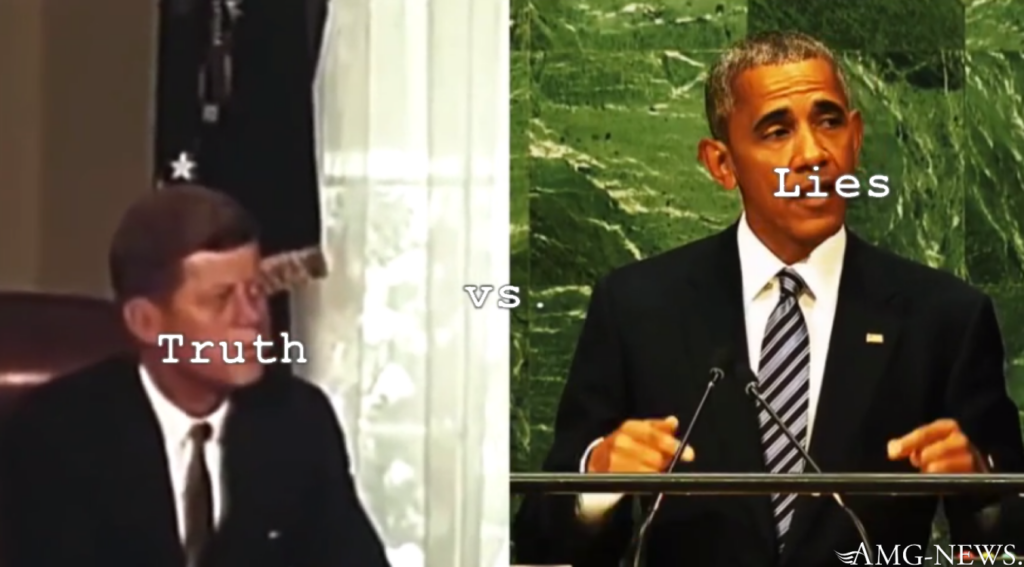 Arguably the most unusual speech ever given by a U.S. president was delivered by number 35 John F. Kennedy in 1961, the year of the birth of number 44 Barack Obama.

Kennedy knew that the problem expanded far beyond separate secret societies like the Freemasons, the Jesuits, etc., but rather was comprised of a single entity (an “umbrella” corporation) with several groups inside of it, working toward a common goal.

He was right. Most people focus on individual parts of the conspiracy, like “Freemasonry” or “Jesuits” or “Zionists,” but these people fail to understand how the pieces connect together, and what the ambition of these groups really is about. They are constructing a monolith. The definition of a monolith is “a large single upright block of stone, especially one shaped into or serving as a pillar or monument.”

Their monolith is the pyramid and its capstone, scheduled for a 2016 arrival. It is here, now. Please be careful: the capstone is not a person, but the finishing of the structure, the completion of the “Great Work.” Freemasons believe they’re descendants of the original builder named Nimrod, the first Freemason. Nimrod will return when the Great Work is complete.

The framework for a NWO has been laid for many years, but it was Obama who declared it openly to the world in what might be considered one of the strongest speeches on a One World Global Order ever delivered at the UN. Obama declared his intention to abandon U.S. national sovereignty to the UN.

What many don’t realize is that Kennedy’s speech from 1961 EXPOSES what is happening right now. Many in politics, Hollywood, business, communications, many in the churches and religion, many in entertainment, are a part of this cabal. It is one unit, one pyramid, with the ambition of placing the missing piece at the top of the monolith.

A phrase commonly used by this cabal is “peace and security,” which the cabal believes will be achieved when the capstone is placed. Pope Francis, George H.W. Bush, Barack Obama, Hillary Clinton, George W. Bush and many others who are a part of the cabal have boldly declared this phrase in speeches. Paul, in the book of 1 Thessalonians, also used this phrase, “peace and security.” But Paul equated this phrase with destruction. And it would be sudden.

Obama’s speech put forward the plan for America. It must be brought down, its power must be stripped away; and they are doing that through the facilitation of multiple crises in the United States. John F. Kennedy in his speech warned about several things, that the American people should protect traditions and national identity. Kennedy also stated that American’s way of life is under attack. Obama said the opposite of Kennedy at his UN speech.

That international norms must be upheld at the expense of traditions. Thus you have the confrontation: the globalist agenda vs. nationalism. One must remember: Henry Kissinger gave us a preview of what would happen under Obama. Obama would take advantage of “crises” as an opportunity for a New World Order (this has happened in 2016)

On September 20, 2016, several things happened. Obama proclaimed “security,” while over in Assisi, Italy, Pope Francis proclaimed “peace” at an international gathering of high ranking religious authority throughout the world.

Francis gathered 450 Buddhist, Hindu, Muslim, Jewish, Christian, Orthodox, and other religious leaders to pray for peace and expand dialogue. Also on September 19-20, 2016, the Arch of Triumph was erected in New York City. The Arch of Triumph is a monument erected by Scottish Rite of Freemasonry, and it’s resemblance to the Royal Arch of Freemasonry is stark.