BOOOM! Justice Is Coming! Hillary Clinton Wasn’t Only Trump Rival to Pay Tech Firm That Spied On Him, Biden Also Hired It for 2020 Campaign 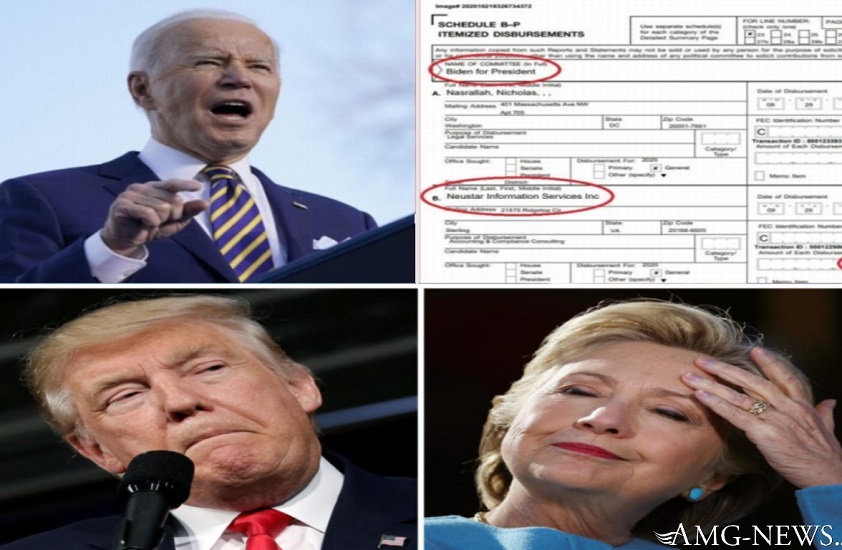 Share
Facebook Twitter LinkedIn Pinterest Email
Medeea Greere, an independent publisher, is now on Telegram at https://t.me/AMGNEWS2022 and exists only on reader support as we publish Truth, Freedom and Love for public awareness. Thank You for your support!

FEC records unearthed by the Washington Free Beacon show that the Biden campaign in 2020 paid the same tech firm that Hillary Clinton used to allegedly spy on Donald Trump during the 2016 campaign.

“The Biden campaign paid nearly $20,000 to a cybersecurity firm at the center of Special Counsel John Durham’s investigation into the origins of the Trump-Russia probe,” Chuck Ross reported at the Free Beacon. According to the Federal Election Commission records uncovered by the Free Beacon, the Biden campaign paid Neustar Information Services $18,819 in 2020 for ‘accounting and compliance work.’ 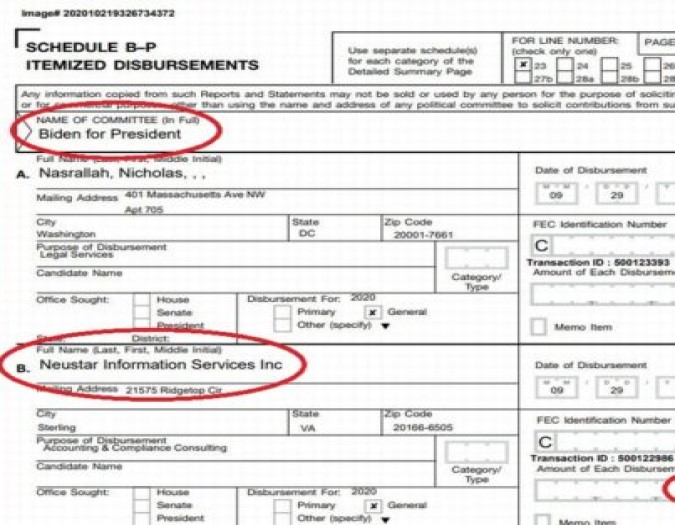 Hillary Clinton’s presidential campaign was found to have paid the tech firm that conducted surveillance on then-candidate Donald Trump’s private, campaign, and White House communications. Special Counsel John Durham highlighted these findings in a motion to probe potential conflicts of interest with lawyer Michael Sussmann, who had worked for the Hillary Clinton campaign.

Must-Read: Updated Clinton Kill List: The List of People “Who Mysteriously Died” After Being Associates With The Clintons

“As set forth in the Indictment, on Sept. 19, 2016 – less than two months before the 2016 U.S. Presidential election – the defendant, a lawyer at a large international law firm (‘Law Firm-1’) that was then serving as counsel to the Clinton Campaign, met with the FBI General Counsel at FBI Headquarters in Washington, D.C,” the indictment’s factual background states. “The defendant provided the FBI General Counsel with purported data and ‘white papers’ that allegedly demonstrated a covert communications channel between the Trump Organization and a Russia-based bank (‘Russian Bank-1’).”

This is referring to the debunked smear that Donald Trump had a secret bank wire with a Putin-linked Moscow bank named Alfa Bank. Clinton’s lawyer Michael Sussmann utilized the false accusations to argue that the federal government should conduct surveillance on the Trump campaign. Sussmann even peddled this baseless allegation to the FBI and the Central Intelligence Agency.

Thus, Sussmann misled the FBI about his work for the Clinton campaign, as well as his ties to a tech executive that has been identified as Rodney Joffe, senior vice president of Neustar.

Joffe had brought the alleged Alfa Bank finding to Sussmann as early as July 2016; both were in communications with former Perkins Coie lawyer and Clinton campaign general counsel Marc Elias. Sussmann’s allegation that Trump had a secret connection with Alfa Bank was repeated at a September 2016 meeting with former FBI General Counsel James Baker.

The FBI would launch an investigation into the Trump campaign to look into the “odd” Alfa Bank connection. Hillary Clinton even weaponized the political disinformation in an October 2016 tweet. 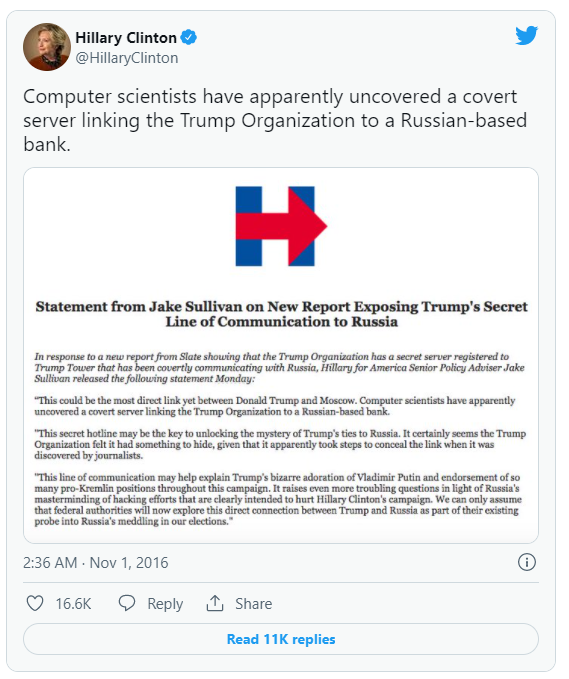 Hillary Clinton’s pronouncement of the findings via the statement of Jake Sullivan are a tacit admission of guilt: The language about the “covert” server and the “secret hotline,” albeit later debunked, show that she was effectively spying on her campaign opponent, and later, the President of the United States.

Sussman’s attorneys, however, deny that Durham’s statement of facts is accurate and are asking it be struck from the record. Donald Trump, for his part, exploded at further vindication of his claim that he was spied on.

“The latest pleading from Special Counsel Robert Durham provides indisputable evidence that my campaign and presidency were spied on by operatives paid by the Hillary Clinton Campaign in an effort to develop a completely fabricated connection to Russia,”

“This is a scandal far greater in scope and magnitude than Watergate and those who were involved in and knew about this spying operation should be subject to criminal prosecution. In a stronger period of time in our country, this crime would have been punishable by death. In addition, reparations should be paid to those in our country who have been damaged by this.”

It turns out it wasn’t just the Hillary Clinton campaign that had a relationship with the tech firm that spied on Donald Trump when he was a candidate and president. The Biden campaign hired the same firm prior to the 2020 election.

The Biden and Clinton campaigns are the only two presidential committees to have ever paid Neustar, the Free Beacon noted, but the DCCC also hired the firm before the 2018 midterms.