US Presidents’ Salaries During and After Office 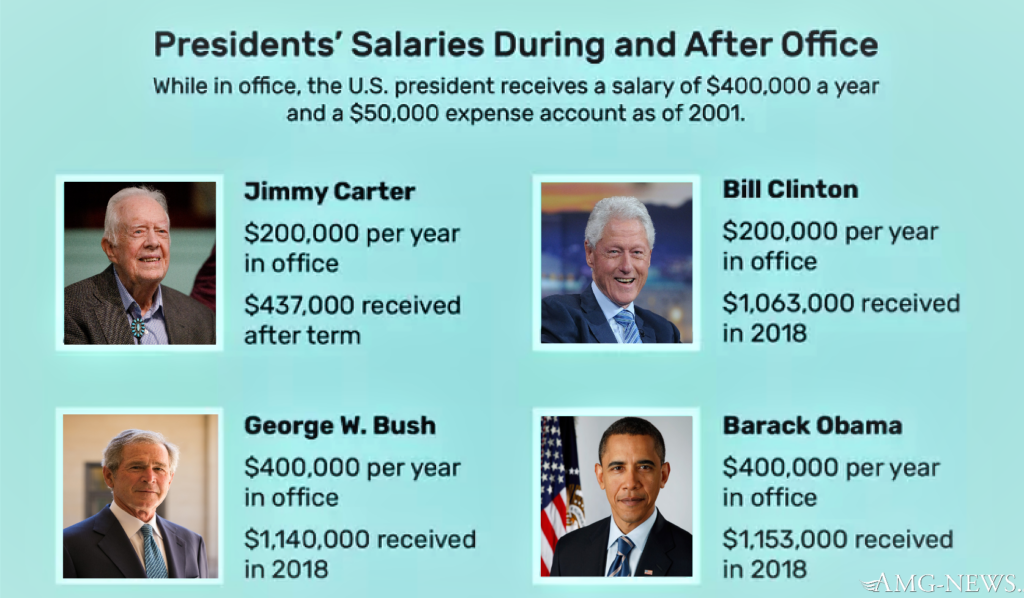 How Much Does the President of the United States Make?

Joe Biden makes about seven times more than the average American per year, but the founding fathers designed the presidency that way.

While in office, the U.S. president receives a salary of $400,000 a year and a $50,000 expense account. Congress added the expense account in 1949. This pays for the president’s personal expenses, such as food and dry cleaning.

On average, Americans make $53,924 per year based on a weekly pay of $1,037 multiplied by 52 weeks. If every American paid an equal portion of the president’s salary, they would pay 12 cents per year.

Title 2 of the U.S. Code also grants a $100,000 non-taxable travel account. Congress has appropriated $19,000 for official presidential receptions and related expenses. Other perks include free transportation in the presidential limousine, Marine One, and Air Force One.

Presidents and vice presidents, unlike other federal employees, are expressly permitted to receive any gift for themselves or on behalf of any family members, as long as the gift is not solicited, coerced, or in exchange for an official act.

Presidents Who Did Not Take a Salary

The Constitution requires a president to take a salary. The Founding Fathers wanted to protect even wealthy presidents from misfortune that could tempt them to take bribes. The salary may have also been designed to ensure that a lack of personal wealth would not prohibit a president-elect from taking office.

Four presidents refused a salary, in whole or in part. Instead, they donated all or some of it:

The First Spouse receives no salary.

Note: Some First Spouses give up lucrative careers to enter the White House. For example, Hillary Clinton had been a partner at Rose Law Firm in Arkansas and Michelle Obama was an executive at the University of Chicago hospitals.

The Vice President’s pension is calculated like that of other members of Congress. Ex-Vice Presidents and their families are entitled to Secret Service protection for six months after leaving office, and temporarily any time afterward if warranted.

Congress has only given the president a raise five times. A president cannot get a raise while serving a current term. As a result, most raises are gifts from an outgoing president to future ones.

Here is the president’s salary through history and what it would be worth in today’s dollars. Thanks to inflation, all previous presidents received more in buying power than the nation’s top executive does today.

How Long Do Presidents Get Paid?

The Former Presidents Act of 1958 ensures that U.S. presidents get paid for life. Congress passed the act to provide for President Harry Truman. After he left office, he had many financial problems. The Act provides former presidents with a pension. They also receive funds for travel, office space, support staff, and mailing costs. The pay should equal that of a head of a federal government executive department. In 2022, these Executive Level I employees received $226,300.

They receive funds for office space and office staff. The aggregate salary for the staff is capped at $150,000 a year for the first 30 months and $96,000 a year afterward. Widows or widowers of former presidents receive $20,000 a year.

How Long Do Presidents Get Secret Service?

The salaries of ex-presidents are set by the Former Presidents Act. The amount is equivalent to the salary of the head of an executive department. The other costs vary according to each president’s needs.

The figures stated below are from the FY 2022 budget, the most recent figures available as of April 2022.

At what age is a person eligible to become president of the U.S.?

Did President Trump donate his salary?

Donald Trump donated his salary to various federal government agencies, including $100,000 to the Office of the Assistant Secretary of Health “to continue the ongoing fight against the opioid crisis.”

What was President George Washington’s salary?