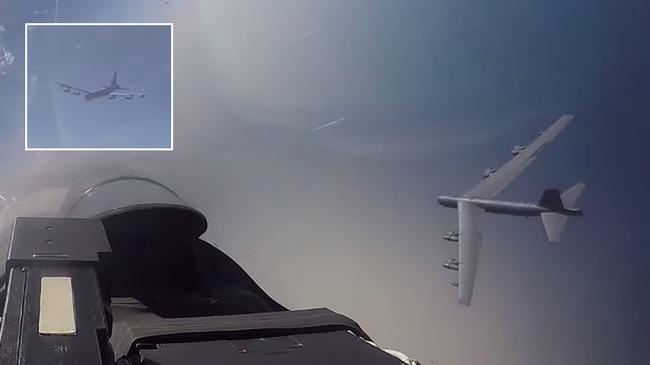 The military tensions between Russians and Americans on the Black Sea and the Baltic Sea,continue.

Several Russian fighter planes were sent Monday to intercept bombers of the US-based B-52N air force bombers that were approaching the southern and north-western borders of Russia.

The incident was captured in a video uploaded by the Russian Ministry of Defence on Monday, and is the latest in a series of brushes between Nato and Russian forces.

In the clip, an SU-27 fighter jet approaches and briefly tails a B-52 bomber before pulling up, leaving the US craft to turn back and away from Russian airspace.

Russia’s Ministry of Defence, which posted the footage to Facebook, said the interception had occurred “in the vicinity of the Black and Baltic seas”.

It added that no violation of Russia’s state borders had been registered and that the “flights of the Russian aircraft were carried out in strict accordance with international Rules for the Use of Airspace”.

The bomber shown was part of a round-trip mission of three B-52 Stratofortress bombers that took off from North Dakota, the Aviationist website reported.

After reaching Europe, two of the craft went southeast and over the Black Sea towards the Crimean Peninsula, while the third continued east and passed over the city of Kiel on Germany’s Baltic coast.

All three were intercepted and had been scheduled to return to the United States, but one was later forced to make an emergency landing at RAF Mildenhall in Suffolk.

Several witnesses posted on social media that they had seen the bomber circling over the area to burn fuel before touching down.

It is thought two of the plane’s eight engines failed after a possible fire.

A TEST OF STRENGTH

The five-crew B-52H is capable of carrying nuclear weapons as well as approximately 70,000 pounds (31,500 kg) of mixed ordnance, including bombs, mines, and missiles.

Russian and Nato aircraft have carried out a number of interceptions of each other over the Russian border with Europe in recent weeks.

Russia has also been using warships from its Baltic fleet to track Nato’s 47th annual Baltic Operations in the Baltic Sea, in which the forces of 17 countries are taking part.

In March, Russian forces intercepted a US bomber over the Baltic Sea, while June has seen at least five such incidents so far, three of which occurred on the same day.

EXPLORE MORE: THE EMP THREAT IS REAL .THE GOVERNMENT IS NOT PREPARED-YOU ARE?

In May, US forces intercepted four Russian bombers and two fighter jets near the coast of Alaska, while on Saturday the RAF carried out their eighth interception of a Russian jet over the Baltic Sea in just six weeks.

The forces of opposing countries often deploy bombers and other aircraft towards each other’s airspace to test the reaction time and strength of the other country’s defences.