Potato harvest from bales is easy, with no fork or shovel, simply cut the strings and kick over the bales, and pick up the potatoes. No marks on the potatoes from the forks or shovels, so they will store well, unblemished. Wrap them in brown paper, this helps them store longer. Keep them in a dry cool place, and check your stock often, tossing out any that have gotten soft or begun to rot. You’ll have delicious potatoes until the following summer when new stock will be ready again.

In normal soil gardens it is important to hill up the soil around the stem as the potato emerges. This is important because potatoes form on on the stem not on the roots. If planted too deep in the soil, the stem has a hard time emerging, because it cannot push up more than a few inches of soil. In a straw bale, we simply plant the potato cutting deep into the bale.

While a bale may be 20″ high, we will plant 16-18″ deep in a “crack” in the bale. The looseness of the bale will allow the stem to easily reach the surface, and the potatoes will form along this stretch of stem, filling the bale with potatoes. I suggest two or three potatoes in a bale, even while planting other crops on the surface of the bale.

These “surface” plantings will be harvested early before the potato vine has stretched its way above and around the bale. Wait for the vine to flower and this is the earliest the potatoes will be ready, however waiting for the vine to wither later in the fall will allow the potatoes inside to mature a bit longer.

Try Hay Bale Gardening, especially if you like potatoes, you’ll never go back to growing potatoes in the soil. Growing potatoes any other way will seem silly once you’ve done it this way. 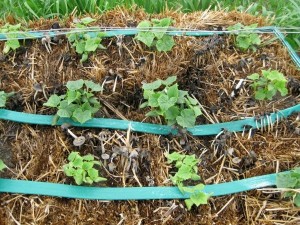 The bale set-up was actually a thrill. Maybe it’s an unfulfilled interest in engineering, but I really enjoyed the challenge of locating and grouping the bales in full sun, amongst a system of north-south lines between posts that I drove into the ground myself with a post pounder.

I enjoyed stringing an espalier wire system (trellis) between the posts, as I imagined great climbing cucumbers, beans and tomatoes.

When the bale conditioning was done and early May rolled around, the planting also was fun. No deep knee bends. No shins caked with dirt. No worry about compacting the soil. The straw bales top out at nearly two feet above ground, so they are ergonomically better even than raised beds for the gardener’s comfort while planting, watering, maintaining and harvesting.

Motivated by the set-up process, I couldn’t wait for the conditioning to be over, so decided to experiment with a couple “naturally preconditioned” bales of horse hay I’d used to help insulate my beehives over the winter. (Note: Most hay contains lots of seeds that threaten to become weeds.

It also lacks straw’s ideal moisture-holding hollow stems. However, horse hay falls halfway between cattle hay and straw: it is mainly hollow-stemmed grasses without lots of seedy plants.) So just as an experiment, I used the breaking-down bee bales to get a head start at planting. 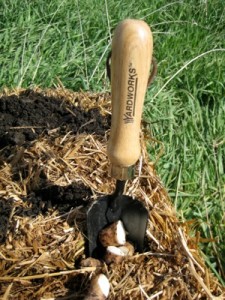 With a trowel, I wedged deep openings and dropped in 4 or 5 sprouting eyes of some old sprouting gold potatoes. Then filled each hole with organic soil.

Also dropped in some sections of wild potatoes, something I’d never seen before and picked at a farmer’s market in San Francisco. To date, a few hills of Golds have emerged and look pretty happy to be nestled into hay bales.

When my bales were fully conditioned the straw was nicely decomposing, its stiffness softened and easy to plunge a trowel into. So, it was time to treat myself to a trip to Seed Savers, just north of Decorah, for some heirloom plants. Tomatoes and peppers are my favorite homegrown vegetables. After choosing from so many beautiful and unusual varieties, I am inspired to try and make it to Seed Savers’ famous late summer tomato tasting.

RECOMMENDED : NEXT TIME IF YOU SEE THIS PLANT ON YOUR YARD, NEVER PULL IT OUT – HERE’S WHY! 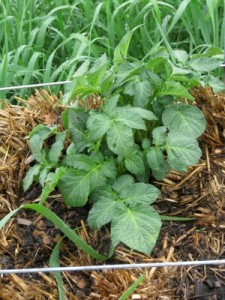 To plant my starts, I scooped trowel-fulls of soil into each planting spot, gauging three tomatoes per bale or five pepper plants or a checkerboard of offset patches of greens and cucumbers.

Carrots, beets and beans I planted in straight, close-together rows. I made sure to save a little leftover straw bale so I could add plants from Lanesboro Farmer’s Market.

And I’ll plan to replace early lettuces with cold-hardy kale and arugula later in the season.

A couple humbling planting points I learned that will promise a better straw bale garden next year: 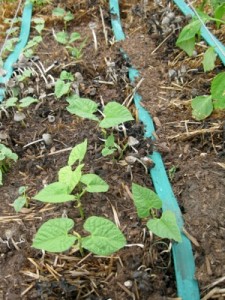 The plan was to set up a fully automatic system on a timer that could function on its own – especially when I need to be away for a few days. No dragging out hoses. No standing over plants, watering each and every one.

So I dedicated a few hoses to the project, buried one that crosses the mowed lawn, added splitters with switch valves that allow me to water new fruit trees planted along my approach to the straw bale site: a bonus that bodes well for a bounty of future fruit.

A second hose splitter junction near the straw bales lets me automatically or manually trigger the soaker hose. The soaker is buried across a mowed area surrounding the bales, then snakes up and down each row of bales. The buried segments of the hose were neatly duct taped to minimize water waste.

There seems to be a learning curve to getting the soaker hose right. It’s a mystery how much water is delivered and whether that water reaches the plants’ roots. How effective is the duct tape, really, in blocking segments of the soaker hose? In the meantime, I enjoy hand-watering and inspecting the garden close-up each morning. When I have to be out-of-town, I’ll take my chances with the automatic backup.

Since the hay bale garden is on the way to our chicken coop and on the way back from the horse barn, it’s kind of fun to add a stop along the way as my husband and I make the rounds each morning and evening to watch our vegetables growing and enjoy knowing we’re a little more in control of what we eat.

It’s too early to tell whether this gardening method will yield that perfect garden I began to imagine in that Straw Bale Gardening class. But since it’s all just a fun experiment, I keep in mind that the worst that can happen is that I am left with nothing but some good compost (composted straw makes good, clean, rich, weed-free soil that could easily translate into a healthy, chemical-free, nutrient-rich raised-bed garden in any future year.) Either way, it’s a win – and a curious new spin for putting vegetables on the table.

The Survival Medicine – A Guide for When Help is Not...

How to Build an Earthbag Dome ! Low-Cost Multipurpose Earthbag Building-You...

THIS TERRIFYING BIBLE PROPHECY IS UNFOLDING BEFORE OUR EYES!